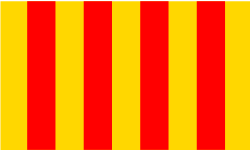 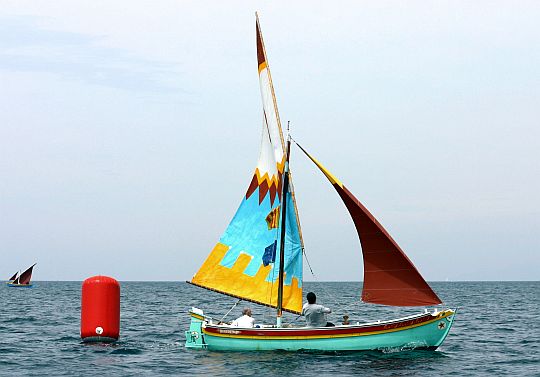 The colours of this Topo Chioggiotto are the work of the Venetian painter Gianni d'Este, who sailed on Alice II for over 10 years. Upon its arrival in Sanary in September 2007, its current owner Mike Tommasi, Venetian expatriate in Provence, renamed it Co Rivo Rivo, which in the language of the Serenissima Repubblica means When I get there, I get there (don't rush me...).

The Topo is a typical boat from Venice, it has a flat bottom and no keel, which allows it to navigate in lagoons and on the northern coast of the Adriatic. Used in the seventeenth century as auxiliary vessel to the great "Tartana" fishing boats, later it was used for supplying the "bragozzo" in the high seas and for bringing the catch to port, or for fishing in the lagoon with nets called "seràgia".

The Topo Chioggiotto, with a stronger structure than the Venetian Topo and fitted with a bridge, is from the lagoon city of Chioggia, which is still a very important fishing port today. The 1939 film Gente di Chioggia illustrates the way life was for the fishermen in this town, and of their families. The topo has two masts and lug sails, traditionally hand painted with pagan or religious motifs, which were used to identify the owner and to invoke divine protection. Thus each family developed an extraordinary range of themes, abstract shapes, letters and images that made reference to their names or nicknames. Sometimes a portion of the sail was reserved for the women to decorate, and they did not necessarily tell their husbands the meaning of their drawings - secrets and jokes among fishermen's wives? 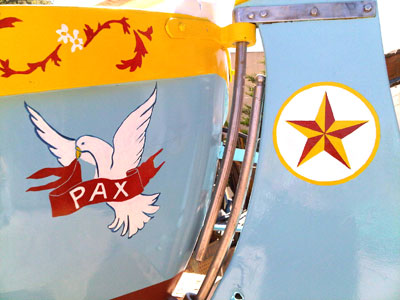 Lug sails date back to the ancient Chinese junks, and it is also well known on the coasts of Brittany and Cornwall. In the lagoon of Venice ii was adopted as the perfect solution for these boats without a daggerboard, with a flat bottom and very shallow draft. The latin triangular sail, used in early times, made the maneuvers on these giant lagoon "windsurfers" very difficult, due to the inability to align the center of effort of the sail with the lateral center of effort of the hull, located at the stern, near the rudder. The lug sail, shaped like a trapezoid with an upper yard and a boom, was born as a variation of the square sail; hoisted on a mast at the rear, it helps balance flat-bottomed boats and even allows sailing close hauled. Downwind you can fly a second lug sail on the mizzen mast.

Much like gondolas, the Topo can be rowed using the Venetian rowing technique, the voga veneta. Contrary to popular belief, one does not propel the boat by pushing on the bottom of the lagune with a pole: one rows while standing facing the direction of travel, keeping the oars in the forcole - the typical Venetian finely carved open oarlocks - with a very special movement that allows rowing and steering with a single oar, even in the narrow canals of Venice. A Topo can have up to 4 oarsmen. 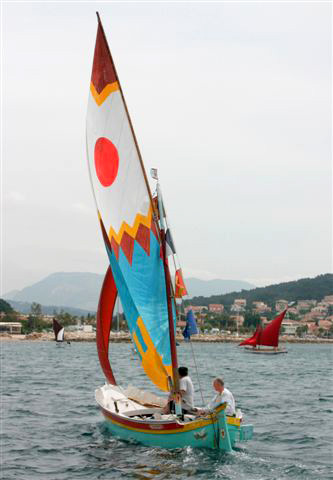 CoRivoRivo maintenance is assured by Capian Marine (Fred) at La Seyne-sur-Mer. Fred is also an artisan fisherman at the beautiful nearby village of Le Brusc (Six Fours).